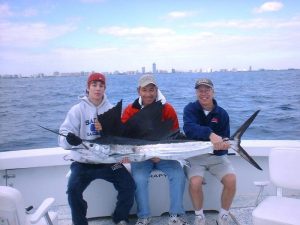 The sailfish, regarded as the ocean’s fastest fish, is a massive and active catch that is a highly prized nautical treasure. These fish have a lifespan of up to four years and have a top speed of 68 miles per hour. They typically weigh between 120 and 220 pounds and grow to be between 5.7 and 11 feet long! Sailfish are mostly found in the Atlantic and the Indo-Pacific, however they are always found in warm, temperate seas, such as off the shores of Miami Beach.

The term “sailfish” comes from the dorsal fin, which spans almost the whole length of the fish’s blue and grey body with white underbelly. Compared to the thickness of their bodies, their dorsal fin is considerably larger. Sailfish are rarely eaten and are mostly sought for recreational purposes, where they are known to put up a good fight.

Sailfish are abundant, and they don’t yet have any particular protection statuses or levels. In fact, Florida sailfish game fishing regularly breaks records every year!

Florida’s sailfish season is influenced by the climate and any potential cold fronts. The fish population will increase as the temperature rises, but sailfish can be caught year-round when marlin fishing in Miami Beach. Sailfish are a popular game fish in the summer, but they are also excellent to catch in the fall and winter. Check us out all year long for a great catch if you have your eye on the sailfish!

Ready to try adding a sailfish to your trophy collection? Book a Miami deep sea fishing trip with Captain Stan and his crew.