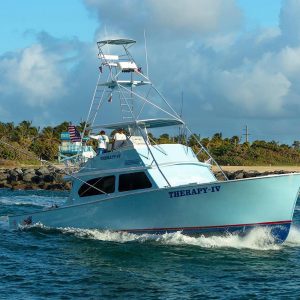 If you’ve never gone fishing in Miami for marlin before, a white marlin would be a good place to start.

While the white marlin is the smallest of the marlins, it is nevertheless massive, measuring up to nine and a half feet and weighing up to 180 pounds. These native fish have dark blue to brown backs that merge into silvery-white bellies and are known for their fiery attitudes and jaw-dropping leaps.

Although one of the sea’s more flashy predators, white marlin prefer to stay closer to the surface during the day in search of baitfish, especially in locations with mixed temperatures, currents, and salinities. ​​Typically, white marlin can be found in offshore seas between 40 and 100 feet deep.

White marlin are strong swimmers and picky eaters all packed into one. White marlins, which are found throughout the Atlantic and Caribbean, utilize their bills to frighten pelagic fish and squid before eating them. They’ll be fighting and diving to greater depths in a matter of seconds.

As for predators, both white and blue marlins are preyed upon by sharks, particularly Mako and great white sharks. So too are marlins vulnerable to swordfish and pilot whales.

Ready to test your angling skills? To book a Miami deep sea fishing trip with Captain Stan and his crew, call us today 305.945.1578.