Fishing the Aggressive Amberjack in Miami 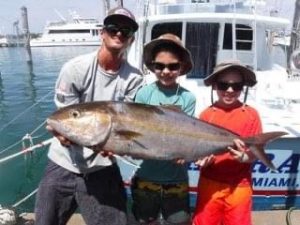 When fishing in Miami, the amberjack is commonly referred to as AJ. It has the temperament of a barracuda. Amberjacks also prefer to reside in the cooler waters of the Pacific and Atlantic Oceans. Although it has been known by the general name “amberjack” for a long time, the term can also be used to refer to a broad variety of amberjack species found globally, including lesser amberjacks, banded rudderfish, yellowtail, and almaco jack.

Greater amberjacks, as the name implies, are the largest amberjack species. They lack scutes and are identified by black stripes that extend from the nose to the dorsal fins. These fish, which may reach up to forty pounds, are usually observed among marine debris or reefs.

Anglers have mixed feelings about the flavor that distinguishes amberjacks. Remove the fish’s tail and a few inches up the body before frying it if you want to taste AJ flesh as worms are usually always present in the tail segment. It can still be enjoyable to fish for AJs even if you don’t intend to eat them. They put up a good fight when pursued, making them valued by sport fishermen.

Ready to test your angling skills? To book a Miami deep sea fishing trip with Captain Stan and his crew, call us today 305.945.1578.