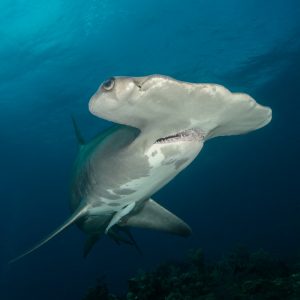 The hammerhead shark gets its name from the shape of its head. They have a wider visual range than most sharks due to their wide-set eyes. They can also scan the ocean for food more completely since their highly specialized sensory organs are scattered across their wide, mallet-shaped head.

Miami Hammerhead sharks hunt alone at night, but they congregate in schools during the day. The great hammerhead shark is the largest of the nine shark species that have been recognized. It can grow to be 20 feet long and 1,000 pounds in weight, while smaller sizes are more typical.

When fishing in Miami, you can encounter hammerhead sharks migrating in large groups in search of cooler waters around the world’s warmest temperate and tropical waters. These sharks can be found both far offshore and close to shorelines. Gray-brown to olive green in color, with off-white undersides, and triangular teeth are some of its other distinguishing features besides its hammer-like head.

The vast majority of hammerhead sharks are small and considered harmless to humans. Though few attacks have been documented, the sheer size and ferocity of the great hammerhead make it potentially deadly. However, since 1926 only 8% of unprovoked shark attacks in Florida have been caused by hammerheads, according to the International Shark Attack File.

Want to see a hammerhead shark up close? Book a Miami deep sea fishing trip with Captain Stan and his crew.