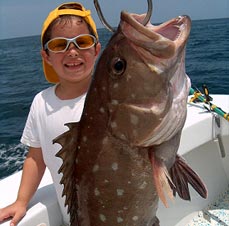 One of the most sought-after deep sea fish is the grouper. In warmer seas, they can be seen in a variety of colors, including green and brown. Instead of a species, grouper refers to a family of fish, which includes sea bass.

Anglers in Miami should note that while groupers have powerful bodies, they lack the speed or endurance necessary for long-distance swimming. It is common for them to be fairly enormous, weighing at most near 220 pounds. They have fewer teeth than many of the fish caught in Miami’s deep waters, but they do contain tooth plates in the back of the mouth, inside the pharynx. Regardless of the size of the grouper, it is not known to attack people.

Catching the grouper fish is a thrilling adventure because it puts up a good fight and is also pretty tasty. These thick-bodied fish provide some of the best  fishing in Miami. They can be found in shallow and deep waters all year, so it doesn’t matter when you want to go grouper fishing. Though during the winter, it’s simpler to find them in shallow water.

There are dozens of different kinds of grouper in Florida, but you’ll most likely see gag, red and black grouper. The goliath grouper may also be seen, although it is protected by federal legislation.

Want to try your hand at catching grouper fish? Book a Miami deep sea fishing trip with Captain Stan and his crew.