The Mako Shark: One of the Ocean’s Most Ferocious Predators 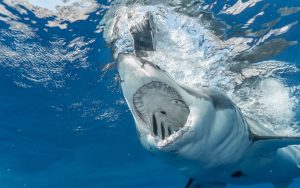 The mako shark, also known as the grey-blue shark, is made up of two species: the shortfin mako shark and the longfin mako shark, with the latter being the rarer of the two. Both of these fish species can grow to be eight to fourteen feet long and weigh more than 1,700 pounds. The mako shark is related to the terrifying great white shark.

While not as fast as some of the other fish we’ve discussed, the mako shark can nevertheless cruise at about forty miles per hour in open waters. Due to a lack of a swim bladder, it is unable to sustain buoyancy without swimming constantly. They’re also recognized for their incredible jumping abilities, which allows them to reach heights of slightly over 20 feet. Their hues, which consist of a dark blue upper body and a white colored belly, make them easily identifiable when fishing in Miami.

Even when the shark’s jaw is closed, the teeth of a mako shark are visible. These teeth are slender, long, pointed and somewhat angled. The mako shark prefers to consume meaty fish like tuna and mackerel, as well as birds that happen to be sitting on the water’s surface. To find food, the shark will swim nearly 30 miles every day.

Looking to get back into the open waters? Book a Miami deep sea fishing trip with Captain Stan and his crew.