Catch a Wahoo Fish in Miami 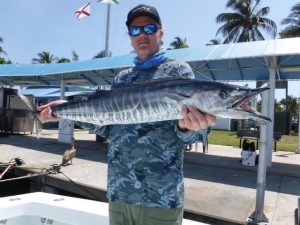 When fishing in Miami, one of the most sought-after game fish to catch and eat is the Miami wahoo. These tasty predators can be difficult to catch as they can reach speeds of up to 80 mph.

Wahoo are a magnificent fish with keen eyesight, excellent concealment and razor-sharp teeth. The scales of this fish are silvery, and the back has a dark blue-green tint. It also has light blue stripes or barring on its sides, which are called flanks. As a result, this species is frequently misidentified as a barracuda.

Wahoo in Miami average five to six feet in length, although unusually giant wahoo’s can exceed eight feet. Adults range in size from 20 to 50 pounds, with smaller fish frequently seen under floating trash. Wahoo can usually be found in offshore waters. They can, however, be seen nearshore and near the reefs at times. Squids and other small fish are their favorite foods. That said, wahoo aren’t picky eaters, so any scrap of fish will suffice as bait.

Wahoo fish prefers to be alone for the most part. They can be found in couples or small, loosely connected groups on rare occasions, especially near abundant food supplies. Instead of adopting camouflage or ambush hunting strategies, they move quickly to pursue their prey.

Wahoo are known to frequent the reefs of Miami. And with deep enough waters anglers are almost certain to come across a wahoo or two when deep sea fishing in Miami.

Ready to test your angling skills? To book your trip with Captain Stan and his crew of deep sea sportfishing experts, call us today 305.945.1578.